This mineral could benefit a wide array of ailments

“Magnesium is a remarkable mineral that doesn’t get anywhere near the credit it deserves for preventing and treating disease,” says Mary Ann Block, DO, founder and medical director of the Block Center in Fort Worth, Texas.
Magnesium is a cofactor in 80% of the body’s metabolic activities, including fundamentals such as energy production, blood sugar regulation, maintenance of electrolyte balance, muscle function, nerve function, protein synthesis, and DNA and RNA synthesis, says Andrea Rosanoff, PhD, director of research and science information outreach at the Center for Magnesium Education and Research in Pahoa, Hawaii. Research suggests that low magnesium levels are linked to hypertension, cardiovascular disease, and Type 2 diabetes.

Nearly half of all American adults have high blood pressure, which is the No. 1 risk factor for heart attack and stroke. In a paper published in the American Journal of Clinical Nutrition, Dr. Rosanoff and her colleagues analyzed 11 studies on high blood pressure that, together, examined over 500 people with prediabetes, insulin resistance, or noncommunicable chronic diseases.

They found that people who took a magnesium supplement (365 to 450 mg daily) had a significant reduction in both systolic and diastolic blood pressure: a mean of 4.18 mm Hg systolic and 2.27 mm Hg diastolic.

Some research suggests higher magnesium intakes might be associated with improved blood sugar regulation. In an analysis published in the British Journal of Nutrition on January 20, 2022, researchers reviewed the results of 18 studies on magnesium and blood sugar levels. They determined that “oral [magnesium] supplementation could have an effect on glycaemic control in [Type 2 diabetes mellitus] patients,” but cautioned that “the clinical trials so far are not sufficient to make guidelines for clinical practice.”
In an analysis in the Journal of Human Nutrition and Dietetics, researchers found that magnesium supplementation had a favorable effect on cardiovascular risk factors associated with Type 2 diabetes, particularly among people with magnesium deficiency. They concluded: “Magnesium supplementation may decrease the risk [of Type 2 diabetes] associated cardiovascular diseases, although future large RCTs are needed for making robust guidelines for clinical practice.”

Perhaps due to the role magnesium plays in many systems and organs, some studies suggest that it might help with a range of other ailments, though the data is often inconclusive:

Insomnia. In a 2021 analysis of past studies, researchers determined that people who took magnesium supplements fell asleep faster and slept longer, though they cautioned that all of the trials they analyzed “were at moderate-to-high risk of bias and outcomes were supported by low to very low
quality of evidence.”

Migraines. A cross-sectional analysis published in Headache reviewed health data from more than 3,600 people and found that people who had higher magnesium intakes had a lower risk of experiencing migraines.

Nonalcoholic fatty liver disease. In a study published in the European Journal of Nutrition, scientists from Columbia University examined 25 years of health data from 2,685 people and found that people in the top quintile of magnesium intakes were 55% less likely to develop the disease than people in the lowest intake quintile.

Stress. In a study published in the journal Stress and Health, people who had low magnesium levels and were under severe stress but were otherwise healthy took 300 mg of magnesium a day for eight weeks. Anxiety and depression scores significantly improved among the participants. “Magnesium supplementation … could provide a meaningful clinical benefit in daily life for individuals with stress and low magnesemia,” concluded the researchers.

Magnesium deficiency is uncommon, occurring in less than 2% of the population, says Dr. Rosanoff, but suboptimal intake is very common. According to the National Health and Nutrition Examination Survey, 79% of American adults do not meet their recommended daily allowance for magnesium: 400 to 420 for men and 310 to 320 for women—and these values, published in 1997, are low compared to the body’s need for magnesium.

“I consider the low intake of magnesium to be the single most important nutritional deficit in the United
States,” says Jacob Teitelbaum, MD, an internist in Kona, Hawaii. That’s because a low intake could be
playing a major role in the current epidemics of heart disease, stroke, and Type 2 diabetes, he notes.

If that amount produces loose stools—a possible side effect of magnesium supplementation—the patient should divide the amount into two 300 mg doses or three 200 mg doses. Or they should cut back on the single dose by 100 mg every few days, until their bowel movements normalize, Dr. Rosanoff notes.

Dr. Block routinely recommends 500 mg daily to her patients—increasing it gradually until the patient reaches bowel tolerance and then cutting back slightly until the bowel movements are again well-formed.

And don’t forget to remind patients to eat magnesium-rich foods, says Dr. Teitelbaum, who recommends leafy greens and nuts, especially almonds, as the best dietary sources of the mineral. Other foods rich in magnesium include dark chocolate, avocados, beans, whole grains, and bananas. 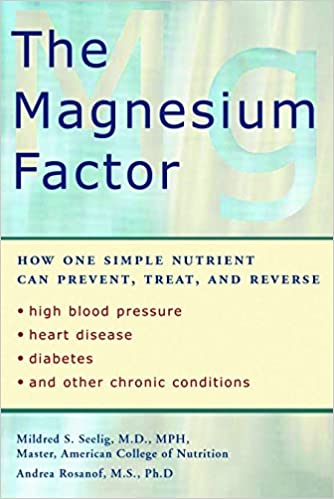